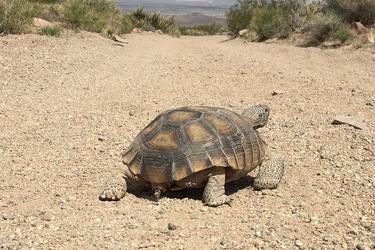 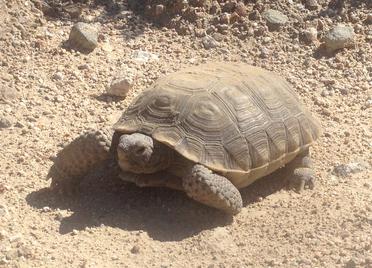 The desert tortoise (Gopherus agassizi) is the largest reptile and the only wild land tortoise found in the southwestern United States.  The tortoise occurs in southern Nevada, western Arizona, southeastern California and northwestern Mexico.

The desert tortoise in the Mojave Desert was federally listed under the Endangered Species Act of 1973 as a threatened species on April 2, 1990.  The tortoise was listed because of the direct losses and threats to tortoise populations and habitat.

The U.S. Endangered Species Act makes it illegal to harass, collect or harm tortoises and provides for penalties of up to $50,000.00 in fines and one year in prison for each count.  State laws and Fish and Game Codes also afford protection to the desert tortoise.

Fun Fact on the Desert Tortoise:

The Tortoises have a high domed shell which are usually brown.  They have powerful limbs that are covered with a thick  layer of scales  to protect them from predators.  At the end of their limbs they have claws to dig their burrows where they can escape from the extreme temperatures of the desert.

Tortoises are well adapted to their desert environment and spend up to 98% of their time in burrows they dig.  Burrow are crescent shaped and are most often found at the base of desert shrubs or in wash banks.

Tortoises are inactive from mid November until February.  The activity period for desert tortoises is from March until late October when they usually spend part of each day above ground.  Tortoises are especially active during warm day when it is overcast or raining, when they seek water that collects in natural depressions or in depressions the tortoises dig themselves.

The diet of the tortoises, which are vegetarians, includes a wide variety of herbs grasses, cacti and flowers.